Swiss Chems are a company I have been buying from for several years. Things were good, then went downhill, but they have now bounced back to be an incredibly high-quality and reliable SARMs & peptide seller.

In this Swiss Chems review, I’m going to tell you all you need to know about who they are, what they sell, and how good the quality is. I’ll explain what I mean by things going bad and then getting good again, and I’ll talk about how they have been perceived on social media over the past few years as well.

So this is a lot more than one of those “cookie-cutter” reviews that you see out there that don’t really tell you anything about them at all. Consider this a five-minute dossier on Swiss Chems, so that you can make the best decision possible on whether they are the company you want to buy your SARMs and peptides from.

The History Of Swiss Chems

Swiss Chems built a really good reputation back in 2018, and through into 2019. They sell a wide range of SARMs and related research chemicals at good prices. They sell them as powder, capsules, and in suspended liquid formats.

The purity was good, backed up by reliable purity reports, and the buzz online was excellent as well. Now here’s the thing, in 2019 a company called “enhanced athlete” got busted by the FBI. They were selling spiked crap. Partly it was SARMs spike with steroids, but it was also selling completely banned substances. The guy who ran then end up in court, and it was all a huge mess.

Swiss Chems were associated with enhanced athlete. I’ve never really seen any evidence that it was actually the case, but certainly on social media people were suggesting that was the case.

Around the same time, the original Swiss Chems website went down for a week or so, and people started putting two and two together and coming up with five.

The truth is that I don’t think that Swiss Chems are anything to do with enhanced athlete. I think they did some drop shipping from China, and I think they had some dubious stuff going on for a while, but they sorted all that out and lifted their reputation.

Right now, from 2020, through 2021, and into 2022, overwhelmingly, that history is behind them, and Swiss Chems are now one of the biggest and most reputable SARMs and supporting supplements sellers in the USA.

What Do Swiss Chems Sell?

Swiss Chems do currently sell SARMs. I don’t know if that’s going to last though, because I know for a fact that the SARMs they sold are imported from China.

The Chinese banned the manufacturer and export of SARMs last year, and a lot of the American SARMs sellers of imported Chinese SARMs been recently sending out newsletters and putting messages on the website saying that they won’t be selling any more once stocks run out because they can’t get hold of them.

Swiss Chems haven’t done that, and seem to still be offering a full range of SARMs in powder and capsule format. That’s great news, and perhaps they have another source, but I would still grab them while they can five as you.

They also sell a great range of peptides, with over 100 different chemicals, so let’s take a look now at the SARMs and peptides they sell in more detail.

They sell all the main types of SARMs you expect, things like Cardarine, Ostarine, and Ligandrol.

However, some of them are named slightly differently. I suspect it’s because they are the more modern formulations designed to get around the increasing chances of the existing SARMs being legislated against.

For example, SR-9009 is not sold, instead, you get SR-9011. Formulated by the same scientist, they are structurally both incredibly similar and both have an identical mechanism of action.

Just bear in mind that these are powder-filled capsules, not orally ingested or liquid SARMs dropper bottles. It’s the raw powder that dissolved in the suspension liquid for liquid SARMs, but instead it’s put into capsules. So it’s identical in quality, and actually more convenient to take.

You will pay a slight premium over liquid SARMs. But in terms of convenience and getting the exact dose without any effort, these capsules are the perfect format, especially for beginners.

Let’s move on to the Swiss Chems peptide range. For me, it’s one of the biggest and best out there.

There are more than 70 different sorts, including some of my favorites:

Prices are good. For example, a 30 mg vial of Semax will cost just $22.50. If you haven’t tried Semax and I’m telling you that you should! Is an incredible focusing nootropic.

I’m guaranteeing you that some of the peptides they sell you will never have heard of. I write about this stuff and I haven’t heard about half of them.

So please do your research in-depth. I’ll be writing quality content as I cover them, but if you’ve never heard of them, don’t just take the word of a single review, make sure you do some research to ensure you know exactly what they do, and what the side effects are.

AOD 9604 is actually a synthetic analogue related to hGH. In animal studies it’s been found to be a consistent and notable fat burner. So it could be good for you, but make sure you read what the side effects and potential longer-term issues could be.

Overall, it’s a great range of peptides and associated research chemicals that allow you to do anything you want. Develop muscle, get a higher sex drive, lose fat, build cognitive performance, and more. 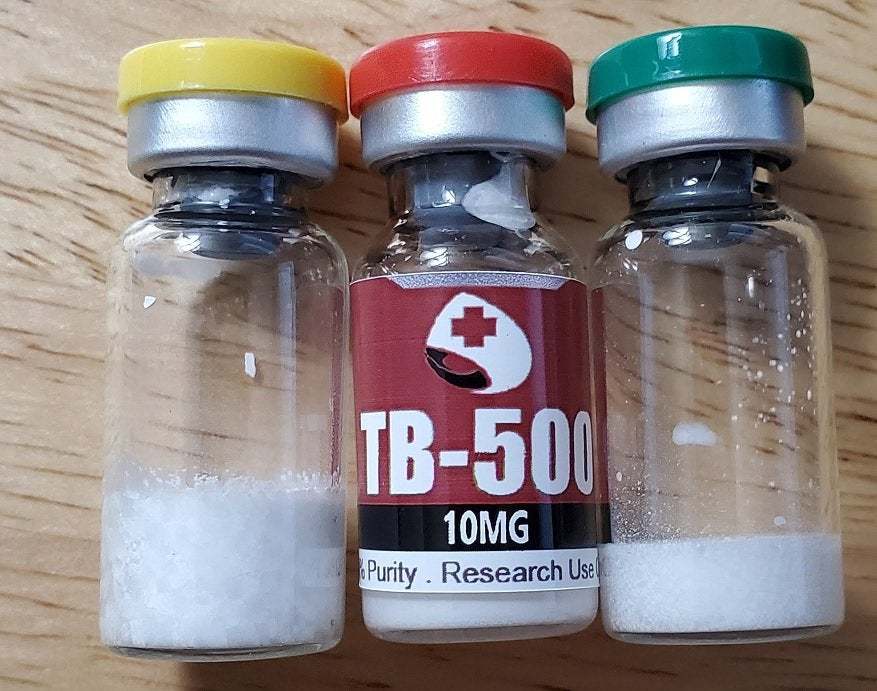 Swiss Chems are now one of my “go-to” SARMs and peptides sellers. In terms of SARMs, they are a little expensive, but the market is diminishing. The Chinese ban has raised prices everywhere, and what you are looking for is a reliable and high quality seller first, and then you need to look at price second.

Swiss Chems have the stocks and they deliver them. Whether that will continue to be the case I don’t know, but grab them while you can.

For peptides, they are superb. High-quality, affordable, and in very good doses.

Swiss Chems also sell PCT supplements, generic Nolvadex, and Clomid alongside Raloxifene. More than that, they sell a testosterone boosting supplement under the banner “Swiss naturals”. This is a natural ingredient testosterone booster, and I think it’s something they will branch out into as supplies of some SARMs and peptides dry up.

The results I’ve had from Swiss Chems SARMs on cycle have been superb.

During my latest bulking cycle, 7lbs of lean and hard muscle mass using YK-11, RAD-140 and GW-501516. Followed up with generic Nolvadex from Swiss Chems as well, the whole experience was as good as I have had in over three years of using SARMs.

Is Swiss Chems Legit And Should You Buy From Them?

Swiss Chems are legit. You should buy from them, because the quality is guaranteed through verifiable lab testing. You’ll get fast delivery, and the range of peptides and SARMs they sell is wide.

You want peptides, SARMs, and PCT supplements, you can get them all from one place in a single order.

They do ship abroad, but you’ll obviously pay high postage rates because of global shipping problems nowadays. In the USA, there will be no problems and I have never experienced any. As I’ve said though, just make sure you know exactly what you are buying if you look at buying some of the new and lesser-known peptides.

A lot of them are very new formulations, and there isn’t much research around them generally, or many people taking them or discussing them in the bodybuilding community, or anywhere else.

It can be exciting when you see these new peptides and see the potential results, but it’s also important you understand exactly what you’re putting in your body.

Generally, though, Swiss Chems are very reputable in a grey marketplace. Since the demise of Chinese SARMs availability, they seem to be selling them, so they’ve either got huge stocks, or they are getting them elsewhere.

In a diminishing market, they are a shining light of what is still available, and definitely should be one of your destinations if you are looking for high-quality SARMs that could have a longer term availability. This is particularly the case as prices are still very reasonable.