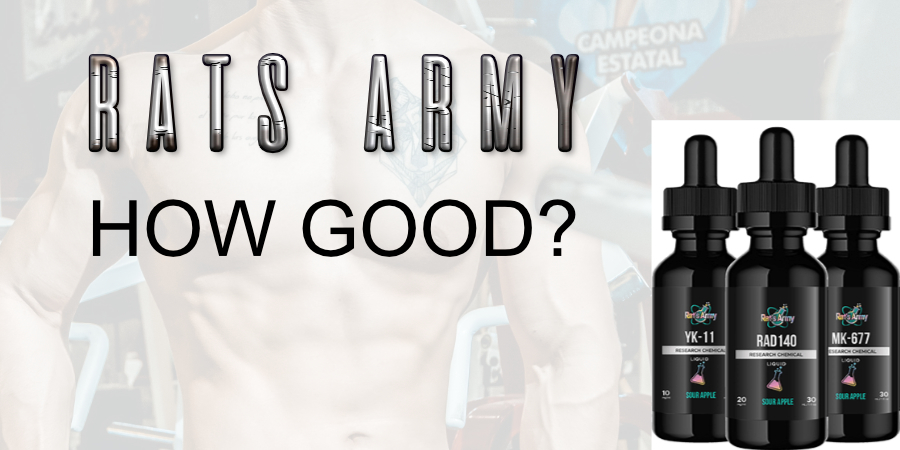 Rats Army have been around since 2019. In this review, I’m going to talk you through everything you need to know about them.

I think it’s fair to say that in the beginning Rats Army had mixed reviews, and a little controversy. I’ve been convinced in the past 12 months that that’s behind them, and the quality of the SARMs they sell is very good.

Also, Rats Army SARMs are made and tested in the USA. There are no Chinese SARMs here, nor dodgy Eastern European ones. Rats Army control the supply chain, and from everything I’ve researched, it’s totally legit.

So sit back and relax, because I’ve put everything together for you so in the next five minutes you can understand you Rats Army are, the quality of the SARMs they sell are like, and give you the info you need to make a great buying decision.

Who Are Rats Army?

Rats Army been around since about 2019, and that’s certainly when I first became aware of them.

It’s a bit of a silly name, but it refers to “gym rats”. So it alludes to dedicated bodybuilders and fitness fanatics.

They sell a wide range of SARMs, and they also sell a lot of different PCT supplements as well.

In addition, they sell the modern range of legal prohormones, and quite a few potent peptides.

Let’s Start With The Negative News Around Rats Army

I don’t want to waste much columns based on this, but any decent and honest Rats Army review has to talk about issues around third-party independent lab test reports.

In 2020 somebody emailed the company whose lab reports were on the Rats Army website verifying purity.

It turns out that some of those lab reports were forged. This obviously dented trust in the company.

But it was quickly rectified, and a new testing company in 2021 verified they were doing legit quality tests for Rats Army, and that the lab test reports were real.

So for me, if you are investigating yourself online, you will see those threads. The truth is though that it was rectified more than a year ago and there is actually nothing wrong with the quality of Rats Army SARMs.

Let’s Talk About The SARMs They Sell

Now there’s nothing earthshattering there, and you’re not getting any of the exciting new SARMs variants like LGD-3033. That’s a little disappointing, but not a huge problem.

However, it’s a solid list, and because they aren’t imported from China, you can understand why it’s only a limited product range.

The meat of this review has to talk about the Rats Army SARMs quality. If they are good quality, then what the hell is the point in using them?

Certainly, when I did my research, I looked at the latest lab test reports and verified them against the quality of a couple of other high-profile USA SARMs sellers.

You’ll find the latest Rats Army lab test reports as a link inside every SARMs product description (just in case you are wondering where they are).

The latest lab test report is dated 17 January 2022. It was submitted as raw powder (once purity is verified the SARMs company will then mix it with a suspension liquid for sale, so don’t think it’s the liquids which are being verified for purity).

Submitted on 7 January, 10 days later the certificate was issued. Using high-performance liquid chromatography (HPLC), it was verified at 98.4% pure. Not the highest purity you will see, but definitely amongst the best, and for the price of the products it’s very good.

So the evidence is clear. Rats Army SARMs are high in purity, and verified for that purity through an independent lab in the USA that has been verified on social media as performing the tests.

I use Rats Army SARMs amongst others, but for the purposes of testing them properly I did a stack followed by PCT purely using them.

I decided the best way of doing this was simply to buy a ready-made Rats Army stack. You’ll get a discount on doing so, and interestingly they sell you the SARMs stack and the best PCT supplement for dealing with testosterone drop post cycle.

I purchased a bulking stack contains the following:

So what we have here is a strong androgenic SARM in LGD-4033, and a non-androgenic chemical in MK-677.

Let me just explain about MK-677. It’s not actually a SARM, as several SARMs really aren’t.

It works as a growth hormone secretagogue, mimicking the activity of a hormone called ghrelin. That helps to increase production of hGH and IGF-1, both essential in building huge muscle tissue.

But the important point is that it’s not androgenic, which is why you don’t need the more powerful clomiphene as your PCT. You are only using one androgenic substance in this stack.

I did a 10 week cycle, and got the following results:

I wanted to gain around 8 lbs. of lean muscle in 10 weeks. I usually respond strongly when I work out hard during a cycle, and this was a good target. I achieved that, and was pretty surprised and impressed.

Overall, I’d put on bulk all over. Some of it was water and bloat, but you could significantly see an increase in size and hardness.

During my workouts I also just felt like I was able to push myself harder. I say I felt like I had a huge rush of adrenaline, but I’m guessing it was simply my body responding to feeling like it had an excess of testosterone.

Overall, my experience on cycle with Rats Army SARMs was comparable to other SARMs I’ve tried and I would certainly use them again, although I would use them stacked with SARMs from other companies.

In terms of PCT, I definitely felt suppressed post cycle. That was due to my high dose of Ligandrol (6 mg daily). The generic Nolvadex supplied bounced me back in four weeks.

What About Peptides & Prohormones Quality?

Rats Army also sell peptides and prohormones. They sell for types of prohormones, and eight types of peptides.

The prohormones (1 Andro, 4 Andro, 7 Keto, 11 Keto) are four of the modern ones, that avoid the legislation to ban on prohormones.

However, they are still prohormones, carrying all the associated problems. Plus, they are the newer ones aren’t as potent. For me, they aren’t worth the risk when SARMs are more targeted and safer.

The peptides are interesting, and I have used BPC-157 before to good effect. I dare not stack them with SARMs, but I do use peptides when I’m having a break from SARMs.

Again, they have purity reports that you can view, and all of my research online has led me to conclude that they are just as good as research chemicals from any other big SARMs seller with the same product range and guarantees.

Just a word of warning, one of the peptides they sell is Melanotan II.

In terms of working well as a peptide, it does. It will build muscle tissue, and it suppresses appetite which helps with cutting.

At high doses you can get very distracted by just thinking about sex all the time. For me, it’s not the best peptide, wherever you buy it from.

So let’s finish up here by concluding this review with my overall opinion on Rats Army.

Is Rats Army legit? The answer has to be “definitely”. They have had problems in the past, but I can verify that those well behind them and they can be trusted.

Pricing is very good. As an example, you can buy 30 mL of S-4 Andarine for just $53.99. It’s dosed at 50 mg/mL, right at the top end of the ceiling I would recommend you dose it at. Higher than that, and you run the risk of vision problems.

So overall, you’re getting strong doses at comparable prices to other large USA-based SARMs sellers.

I also love that they are a one-stop shop. SARMs, prohormones, PCT, peptides, nootropics, topicals, and even sapogenin bracket plant steroid products. Buying everything from one source says a ton on shipping.

In conclusion, Rats Army SARMs are high-quality, as are the peptides. The fact that they sell the PCT supplements is also a bonus because it means you don’t have to pay to lots of shipping.