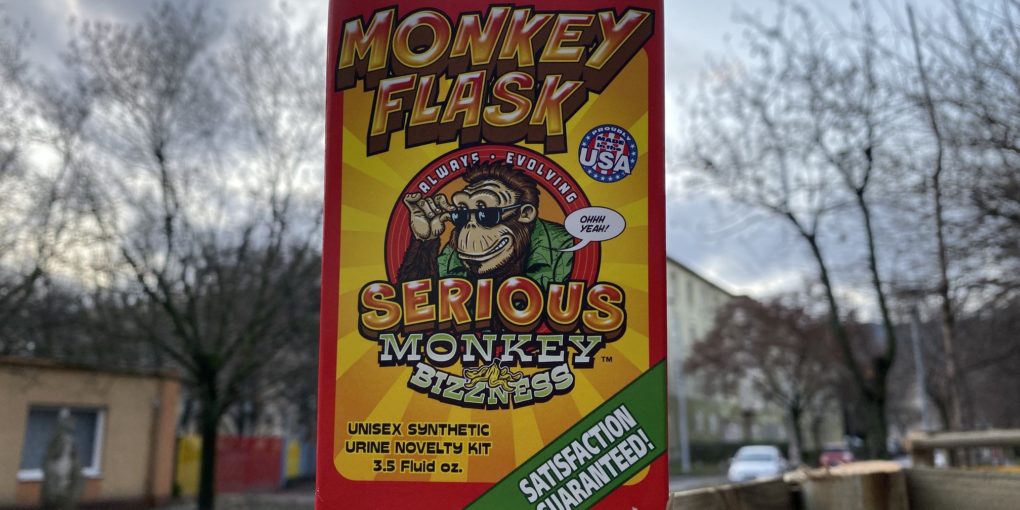 Monkey Whizz Synthetic Urine Review – How Good Is It?

There’s a lot to talk about in this Monkey Whizz review. It’s one of the better-known brands of synthetic urine. But is that because of the stupid name, or because it’s good at fooling people like Labcorp?

In this review we will talk about the ingredients, how to use it, clear up some confusion around what Monkey Whizz actually is, and give you some tips on being successful at passing drug tests.

I’ll also talk about the downside of this product, which could catch you out. It’s an assumption which is catching out both men and women, and I want to clear it up.

Plus, we will finish this review of Monkey Whizz by seeing where it sits on the list of top brands of synthetic urine, so you can make a better decision based on this review of whether it’s the best choice for you.

Serious Monkey Bizzness is the company behind Monkey Whizz. However, there’s some confusion about that because all of their products are referred to as “Monkey Whizz”, which doesn’t make it clear which one needs.

So I want to go through all of their products in detail here to ease that confusion. The company makes four products, all often referred to as “Monkey Whizz”. But only one of the products is actually called by that name, so let’s show you what the product range is, and where the actual Monkey Whizz urine product falls into it:

So as you can see, Monkey Whizz itself is not the urine, but a product that contains it, a belt with a dispensing tap.

But in this Monkey Whizz review, I’m going to talk about both the belt, and the Monkey Flask product, which is basically what you get with the other best brands of synthetic urine. 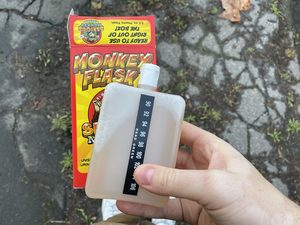 So what are the ingredients in Monkey Whizz urine? Does it contain all of the chemicals that are needed to pass the validity checks that lab tests for?

So it does contain all the basic ingredients you will need. However, there are a couple of reasons why Monkey Whizz synthetic urine falls down compared to some of the competition:

I hope you can see that Monkey Whizz instructions can’t all be the same, because it refers to 4 different products.

So let’s talk about the basic Monkey Whizz Flask first. The instructions for that are pretty straightforward:

Now we get to the actual Monkey Whizz product, so we actually have a belt to deal with as well: 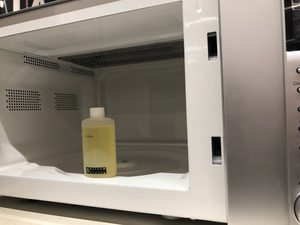 The monkey Flask is straightforward, you just have a flask of urine. Because you are only going to submit this in an unsupervised drug test, you’re out of sight, so it’s really simple to take out the flask and submit the sample.

But if it’s an unsupervised drug test why you need the Monkey Whizz incognito belt?

Think about it, is just another layer of complication. You have to pull it out, smoothly operate the tap without spilling it anywhere, while dealing with the sample cup as well.

The whole thing seems geared towards supervised drug testing. But I sure as hell wouldn’t pull out that tube and tap out during a supervised drug test, even if I wasn’t being directly looked at. There’s just too much margin for error, just extra things that can go wrong with those additional steps.

For a supervised drug test, you obviously have to use the Monkey Dong if you’re going to submit a fake sample. So I just don’t really get who the incognito belt, the actual Monkey Whizz product is aimed at.

The company claim it can also be good for women. But if it’s unsupervised, it doesn’t matter if you’re a man or woman, nobody will be watching you, so again, why complicate matters with the belt, tube, and tap system? 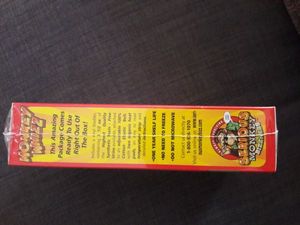 Does Monkey Whizz work? I think you stand a great chance with this synthetic urine if we are talking about the actual testing process.

It’s quite a complex formula, it will pass visual scrutiny, and for the $39.95 that the Monkey Flask will cost you, it’s good value. Of course, there are risks, it’s not the most complex formula, it doesn’t smell like urine, and there is the dice roll that it might contain biocide, which could be checked for.

You get the same urine in the actual Monkey Whizz product, so it stands the same chance of working. If you want the reassurance of having it close to your body and having a pair of heatpads, it’s a better product than the Monkey Flask.

However, you have to deal with the complexity of the tap tube system. It’s possible to use it, and it does mean you don’t have to worry about tucking the flask inside your underwear, or anything coming loose.

But you will need to practice with it several times beforehand, and you will have to check the temperature very carefully before entering the testing lab. The other downside to the Monkey Whizz incognito belt over a flask product is that you can’t heat it up again easily.

Picture the scenario, you have the Monkey Flask, and you get to the lab and see what the temperature is cool, below the minimum needed. You find some hot water, or you have a flask of hot water on you, and you can literally heat it up again by pouring water on it.

But you can’t do that with the incognito belt. You can’t adjust the temperature with hot water, you can’t even practically remove it and put it back on again. You will be stuck. 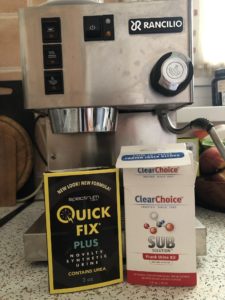 So the conclusion of this Monkey Whizz review is that it’s a great budget synthetic urine product.

Don’t ever buy Monkey Whizz on Amazon because it’s often fake. Monkey whizz Amazon, eBay, anywhere like that, is a bad idea.

Buy it from a reputable shop like this one.

In terms of alternatives to Monkey Whizz. There are three better:

Quick Luck is the most complex formula it costs $100, followed by Sub Solution for $80. But what really sets them apart is the heat activator powder they both employee to get the temperature of the sample right.

As we’ve already talked about, the biggest problem, and it’s the biggest failure problem when submitting a fake sample, is submitting it too cold. With the heat activator powder, you can check the temperature before you go in, and add a little more. So it gives you control where the budget brands using heatpads can’t.

So the conclusion of this Monkey Whizz review is to give it a try if you’re on a budget. The belt can really help, but it does have the complexity of the tap system. If you want to really be on a budget use Monkey Flask, which is perfectly adequate for a basic unobserved pre-employment drug test.