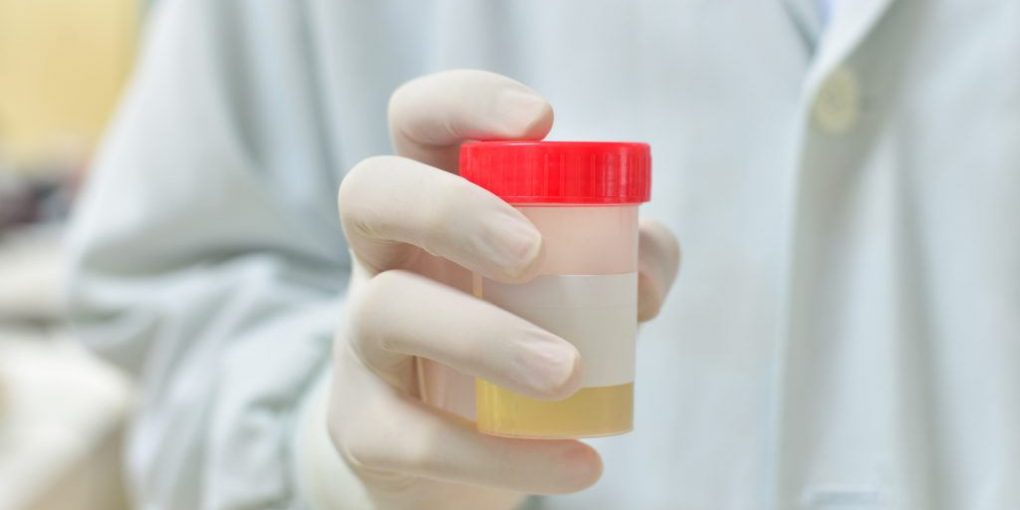 Fake Penis For Drug Test: Safe Or A Gamble You Should Avoid?

I’m going to discuss this with you using a fake penis for a drug test. It may come as a real shock to some people that you can get prosthetic penises designed for drug tests, but I can assure you they exist, and I’m going to talk you through everything you need to know to use one successfully.

Specifically, I’m going to talk about when you might need a fake penis to pass a drug test, and how to use one. I’ll then also discuss similar options that don’t involve a literal fake penis, so you can weigh up which might be best for you in that situation facing a supervised drug test.

Also, I’ll talk you through another way that you can pass a supervised test without resorting to a urine bag for a drug test.

What Exactly Is A Fake Penis To Pass A Drug Test?

There are two types of drug tests: supervised and unsupervised.

An unsupervised drug test covers the vast majority of drug testing done in the USA. In fact, more than 90% of them, and mostly for employment purposes. You simply go into another room, or at least behind a screen, and you are not observed in any way.

For an unsupervised drug test, you can use fake urine easily, because you can smuggle it in. But then there is the second type of drug test, the supervised one.

With a supervised drug test you will be searched before you submit your sample, a patted down, not a full strip search or anything, but you will be checked to see if you are carrying anything.

So the supervised drug test makes submitting a fake urine sample the usual way, by pouring it from a flask you have tucked into your underwear, something you can’t do, which is why the synthetic urine belt with a prosthetic penis on it is an option many people take instead. But it is a high-risk strategy.

The Better Option Could Be A Synthetic Urine Belt

So what’s happening is that you know someone’s in the room, but they aren’t staring straight at you. So the fake penis for a drug test works in many instances because even if they are looking at the corner of their eye, or glance, from the angle they will be at, they would be unlikely to spot it being fake, especially as your back would be turned. It’s more than you can stand and urinate in a natural position as a male.

But it’s still very high risk because if they do spot the prosthetic it just looks a bit strange, they can stop the test and demand to know what’s going on, or invalidate your test. So a synthetic urine belt can be a better option. This is where there isn’t a prosthetic penis at all, it’s a belt of urine that has a small hose and tap attachment.

As long as your back is turned, that could actually be less likely to be spotted than a full prosthetic penis where you have to get it out and squeeze in a certain way to get the urine to come out of the belt.

So what we are talking about with a urine belt, whether it’s got a tap or fake penis, is basically a belt that contains the urine in a pouch (sometimes several), that’s heated by heatpads that are thin and tucked in around the belt. 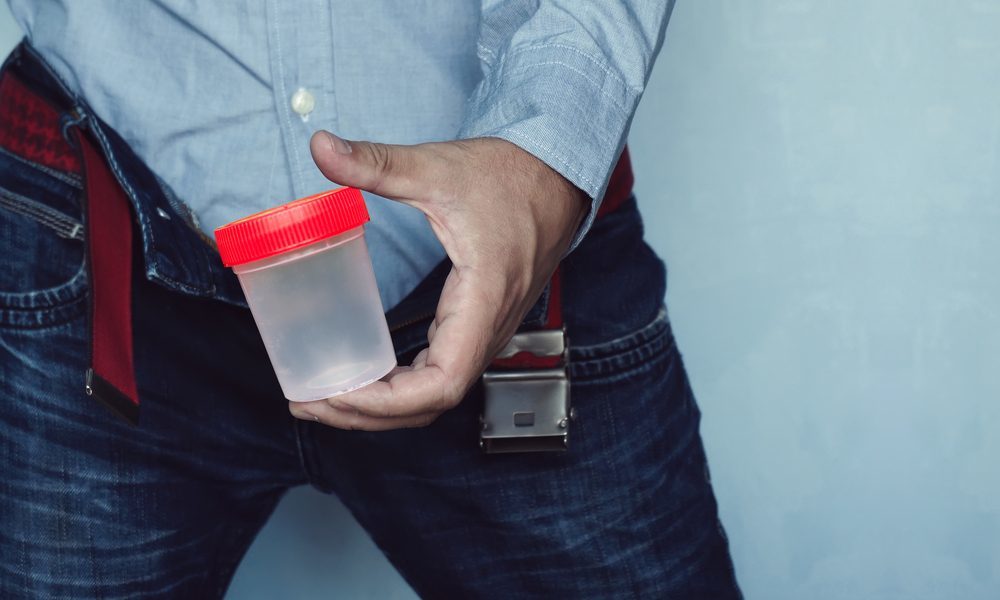 To help you understand exactly how you would use a fake penis for a drug test, let’s talk you through the basics of using one:

Your Best Option Is The Monkey Whizz Synthetic Urine Belt

The Monkey Whizz belt costs around $50 and has a tube and tap dispenser. The Monkey Dong costs $100 by comparison.

The Monkey Whizz belt has the urine already inside it, and you just need to activate the heatpads and tuck them into the belt.

With the Monkey Dong, you get a flask of powdered urine that you mix up and put into a single pouch on the belt above where the dong itself is. You get four air-activated heatpads that you then use one or more of to get the temperature right.

For me, if you’re going to use the Monkey Dong, which is probably easier to use, but runs the risk of being spotted because it’s going to protrude out further and could look artificial if directly spotted, then you do at least get to practice because the urine isn’t in the belt. You can fill it up with water, and get yourself an expert at doing it naturally.

You can purchase Monkey Whizz products if you click here. 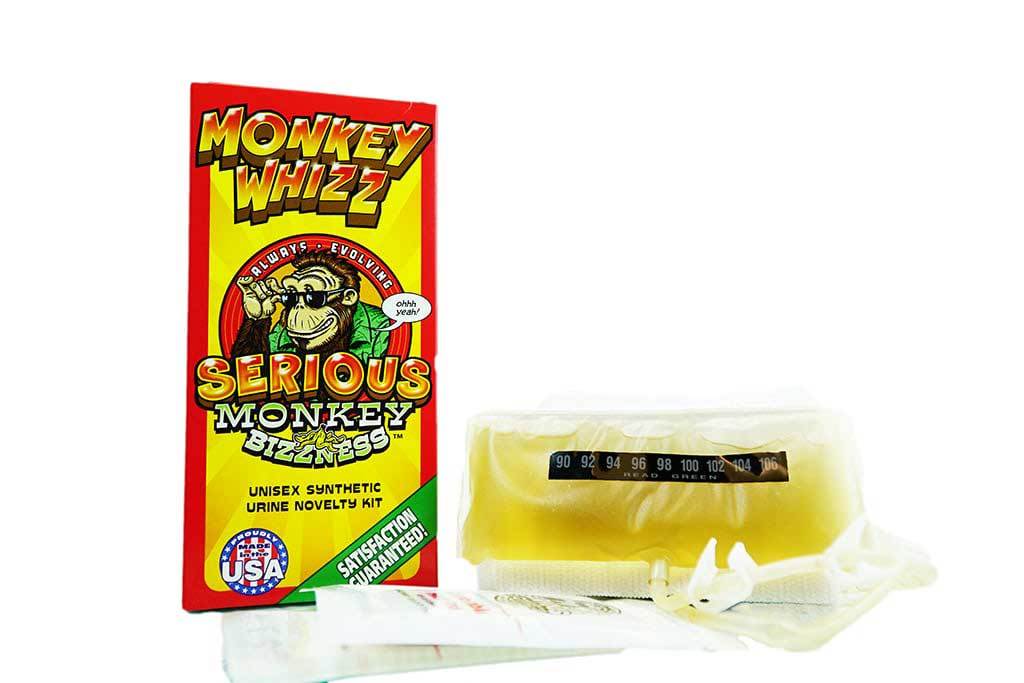 What I Would Do If I Faced A Supervised Drug Test

If I was facing a supervised drug test (which is highly unlikely), I would consider using the Monkey Whizz synthetic urine belt. Although the tap in the dispenser is more discreet because it’s smaller, it is more fiddly to deal with though.

So I probably would go for the Monkey Dong fake penis for a drug test that was supervised.

However, I think I’d also suggest an alternative strategy that is far less likely to get detected but does have a slightly lower success rate once you’ve submitted the sample.

I would use a high-quality detox drink like Ultra Eliminex, or Rescue Cleanse. With a detox drink, you drink it a couple of hours before you take the test, urinate several times to get rid of the old urine containing toxins, and the fresh urine coming into your bladder is balanced because of the contents of the detox drink.

Although a detox drink only lasts about five hours at most before toxins leak back into your urine, it is undetectable in a way that using a synthetic urine belt simply cannot be.

As long as you do at least a 48-hour detox before the day of your test, then you will get rid of as many toxins as possible, leaving fewer toxins your body, meaning more time before they start leaking into your urine again. If you can speed this up with some Toxin Rid detox pills to get rid of the more toxins, then that’s the ultimate strategy for me to pass a supervised drug test.

But if you are determined to use the urine bag for drug test success, then I would go for the Monkey Whizz synthetic urine belt or the Monkey Dong product.