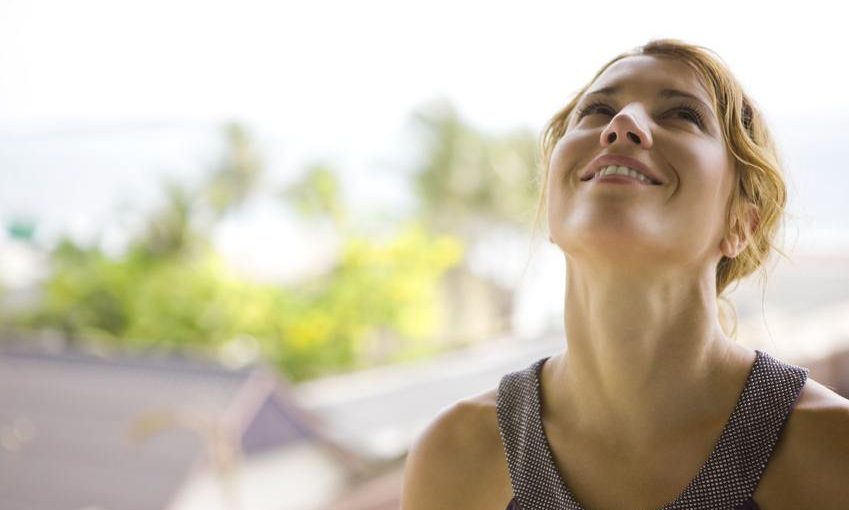 This Sulbutiamine review is going to talk to you about the effects and benefits of using it, warnings to watch out for, and I’ll talk you through my experiences with using it.

Although Sulbutiamine can be incredible, the effects can be short-lived if you’re not careful. So I’ll tell you how to avoid that almost instant tolerance that some people experience.

But more than that, I’m going to tell you how to stack it for best results as well, so that when you do use this interesting nootropic you’ll get the most out of using it.

Sulbutiamine was first synthesized by Japanese scientists who were looking for something that helps to address a vitamin deficiency driven condition called beriberi, which is still common in parts of the world where dietary intake is incomplete. Basically, to address a deficiency of thiamine, more commonly known as vitamin B1.

Sulbutiamine is artificial in construction but contains natural molecules. It was created in a lab as a multipart molecule. It’s a pair of thiamine molecules bound together with a Sulphur group. This structure gives it better bioavailability than normal vitamin B1 and allows it to more readily cross our blood-brain barrier (it is highly lipophilic).

It was very quickly adopted by people looking to boost their performance, as it was also found to boost cognitive performance. It has also been investigated as a potential treatment for chronic fatigue syndrome as it produces significant physical energy-boosting benefits as well. 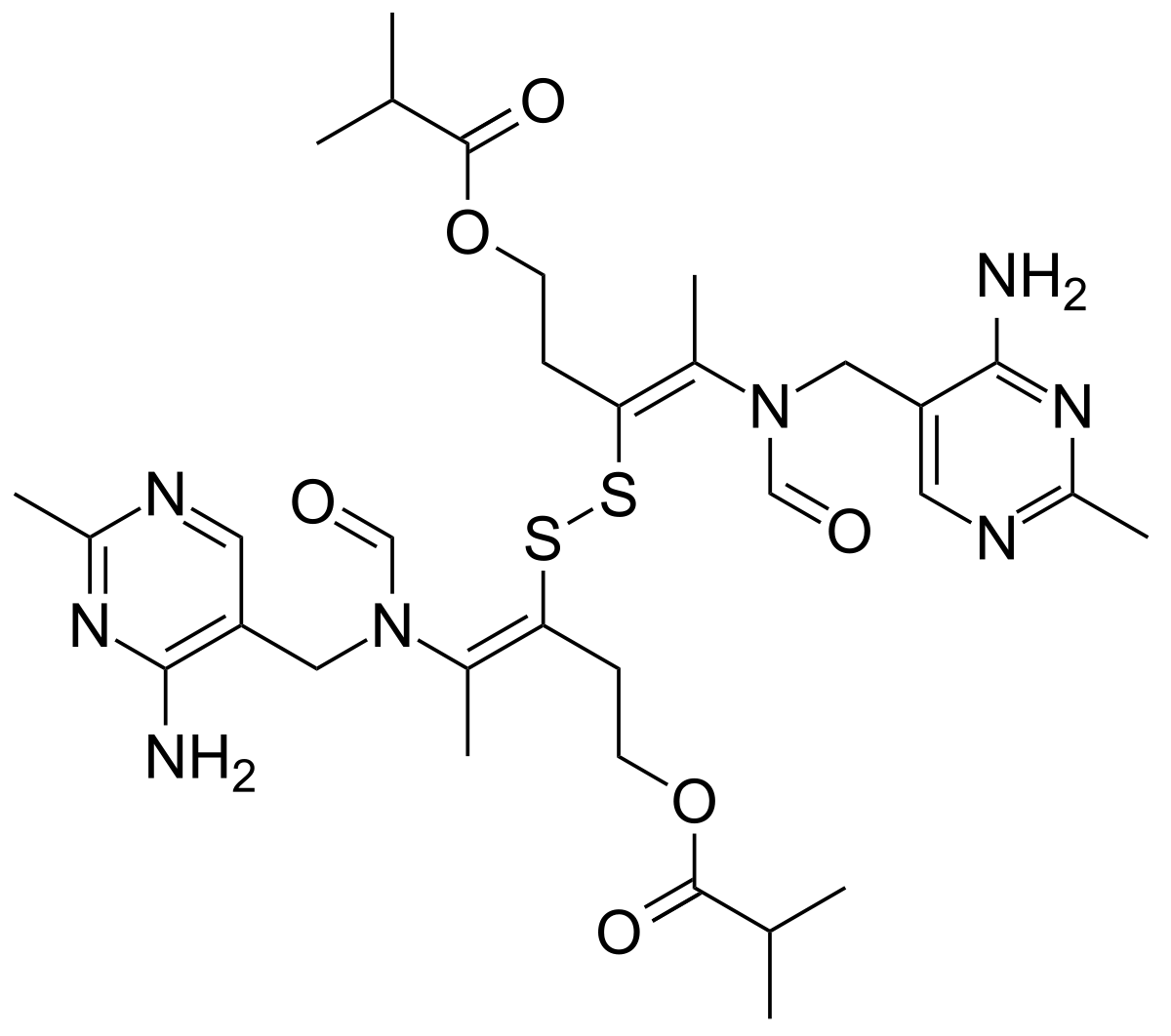 So what Sulbutiamine does is to supercharge your body with vitamin B1, producing noticeable cognitive and physical benefits.

Sulbutiamine works in the following ways:

That’s the science behind Sulbutiamine, but what does that mean in reality: what practical nootropic benefits does it deliver?

I’m going to speak you practically hear about the effects of Sulbutiamine based on my own experiences.

If you take a good dose (we’ll talk about dosage later) of Sulbutiamine, the onset is quite rapid. Within around 30 minutes you’ll start to feel different, and within one hour the full Sulbutiamine effects will have kicked in to produce the following:

Basically wakefulness, positivity, energy, and confidence all hitting you significantly within about one hour of consuming a dose of Sulbutiamine.

Let’s also talk about euphoria. At high doses, you’re really releasing a rush of dopamine and glutamate that can create a genuine Sulbutiamine euphoria. The level of mental clarity, physical energy, focus, and generally feeling good can be addictive in itself. That’s why high doses of Sulbutiamine really come with a caveat and warning attached to them.

Let’s take a careful look now at the Sulbutiamine dosage range you should be working because it’s crucial for several reasons:

Now I’ve known people on Reddit who are smashing Sulbutiamine at high doses every day. Universally they always seem to get addicted, or weirdly report that the effects tail off and never come back.

You have to keep the dose irregular and moderate to get the maximum effects out of Sulbutiamine, especially if you are using it as a nootropic, a genuine cognitive smart drug.

Let’s look at the dosage ranges that are advised. I say advised, but this is not scientifically advised because Sulbutiamine has never been through proper human trials, especially not on healthy human brains to use as a nootropic. We are talking anecdotally from my own experience, and people I know (and from my research online):

What Sulbutiamine Side Effects Are Normal?

Used sparingly, Sulbutiamine can have fantastic cognitive benefits. It can also energize you, and make you feel really happy, positive, and confident.

But there are some significant side effects that you need to be aware of.

Firstly, you are elevating your dopamine levels using Sulbutiamine. If you do this too often then your body won’t produce its own dopamine as well, which can lead to a lack of dopamine and depression.

Secondly, if you use it regularly then effects can diminish rapidly. I’m talking within a few days. If you hit 500 mg per day for three days, then on the fourth day you could find you get virtually no benefits at all. It’s a strange substance, and in extreme cases, people say they get incredible feelings for a few days and then never get them again.

Lastly, it can make you feel emotional and out-of-control. You can react more extremely, which could be down to the elevation of dopamine which increases are desire to take risks. But you can also develop mood swings, apathy, and general irritability.

Where To Buy Sulbutiamine Online

So the conclusion of this Sulbutiamine review is it something to experiment with carefully. Use it sparingly and at the minimal dose needed to get the best effects.

If you are hitting Sulbutiamine frequently then the effects can suddenly stop, or diminish dramatically. You could also get mood swings, and if there is any history of depression or getting the blues, then for God’s sake be careful with messing around with your levels of dopamine.

For me, the first place I always recommend now is a website called Science.bio. They have been around for a number of years and have a great track record in delivering high-quality nootropics. 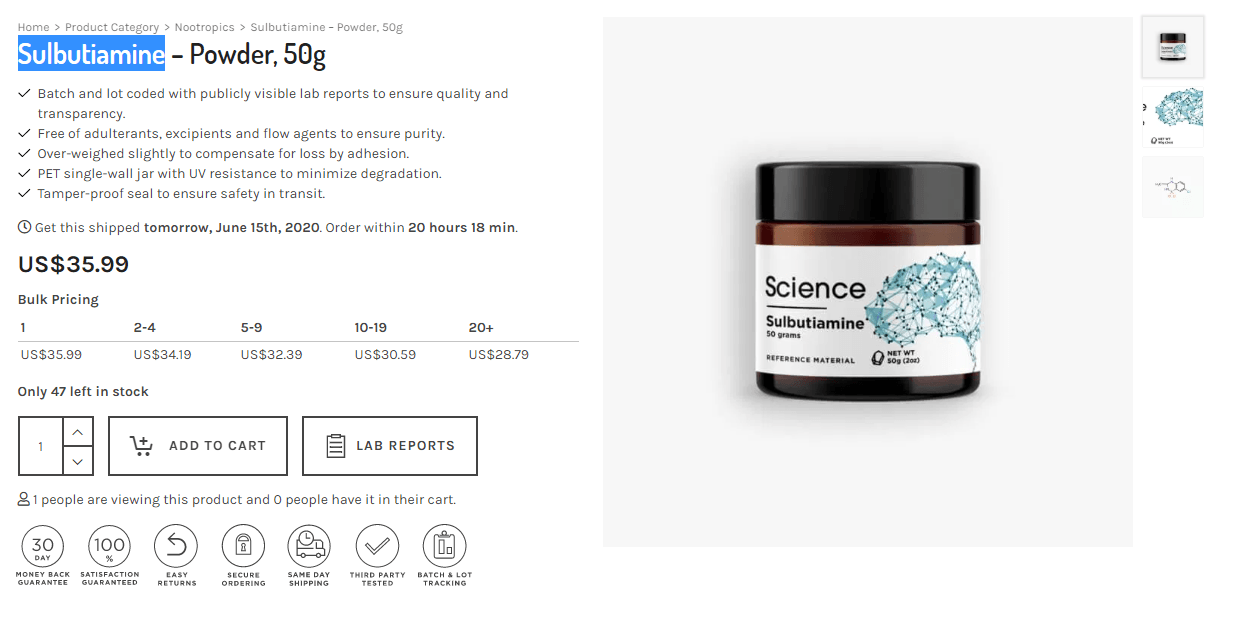 They do an incredible range of cognitive enhancers and other supplements. Plus, vitally, everything they sell is batch tested for purity. You can view the individual independent third-party lab reports on every product page.

Sulbutiamine is dirt cheap to buy. 50 g of powder costs just $35.99. If you think that an average daily dose is around 500 mg, then you’re getting potentially 100 doses for your money. I’d advise that that’s a full year’s worth of Sulbutiamine experiences if you are being sensible.