A few years back, Blue Sky peptides were a big deal in the world of SARMs, peptides, and other similar types of supplements. But that reputation is sinking lower and lower. So what’s going on, and can you trust them?

In this full Blue Sky peptides review, I’m going to tell you anything you need to know in just five minutes.

I’ll tell you if Blue Sky is still trustworthy and legitimate, what they sell, what the quality is like, what the online feedback/reviews are saying, and if you should risk your money buying from them.

All that, plus I will also give you a couple of alternatives that do sell high-quality SARMs and peptides, in case your conclusion after reading this review is that Blue Sky isn’t legit enough to take a risk with.

Who Are Blue Sky Peptides?

One of the reasons that reputation and trust has suffered is because of the complete lack of transparency about who the hell runs the company. This the website doesn’t list any address on it, not even in the privacy or terms pages. It’s not a limited company so there’s no direct information.

They allude to the fact that they can’t sell certain products because of the laws of this state they are in, but they don’t tell you which state. Within the shipping advice page there is nothing telling you where they ship their parcels from. All round, it really feels like these guys don’t really want you to know who they are, or where they are based. That’s obviously a huge red flag.

Blue Sky peptides reputation has taken a huge hit in modern times as other companies have appeared with better trust.

As an example of what I mean, let’s look at the purity reports. They tell you what each batch purity is, giving you trust in what you’re buying.

The issues with Blue Sky peptides reports on the product pages are:

So overall, there’s really no trust that what you are buying is good quality. All the purity reports are out of date, and they look like the generic ones supplied by the chemical creators in China, to have just had Blue Sky peptides logos dumped on the top. It’s just a complete mess.

You also don’t get trust from the website. It’s really poor quality, a generic shopping cart website that’s been the same for five years. There’s no information on it, no accountability, nobody to contact properly.

Worse than that, is the huge discounting. Currently, they have a buy one get one free sale on most products.

If you buy wholesale, the price can drop by up to 90%, to less than six dollars each. What on earth are they buying from China and at what price, to be able to sell them to you at such a low price wholesale and still make a profit? 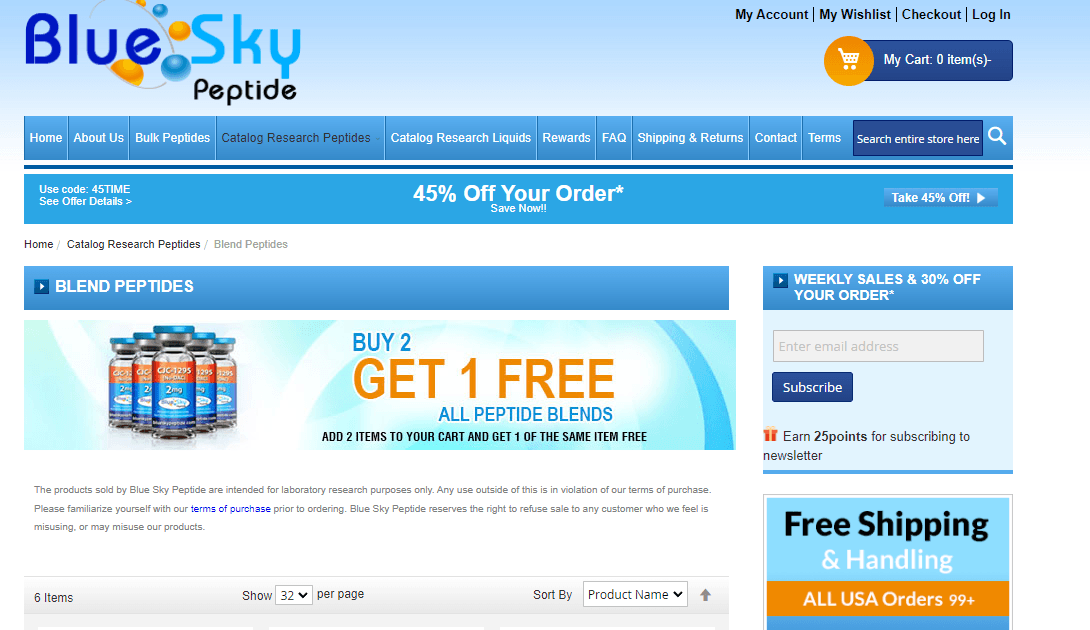 Blue Sky Peptides SARMs: Do They Still Sell Them?

Blue Sky peptides used to be one of the few companies who sold SARMs in the USA, but that’s not the case anymore. China introduced the SARMs export ban last year, and so the supply has dried up.

It’s more evidence that Blue Sky peptides by their stuff from China, because they have stopped selling SARMs. Other reputable companies are still selling them, and are claiming they are domestically produced in the USA, so they are doing things the right way.

But the truth is, Blue Sky peptides no longer sell SARMs. The SARMs they used to sell were poor quality Chinese SARMs. We know that, because of the thousands of comments on Reddit user groups saying how they got no benefit from using SARMs from Blue Sky peptides.

Blue Sky peptides do still sell a range peptides and associated research liquids. They sell a range of six “blended peptides”, each containing two complimentary ones.

I’m a little concerned about those, because people might be taking them without understanding what doing that could mean. Especially as we don’t know what the side effects can really be.

For me, it’s far better for people to make individual choices on individual chemicals. Although Blue Sky peptides go into huge detail in terms and conditions, and across the website, and how these are research chemicals and they will ban people who buy them for human consumption, the truth is that everybody knows that that’s exactly what is happening.

They sell research chemicals that are not peptides. There are 15 different types, including the PCT supplement called clomiphene (generic version of branded products such as Clomid).

So in all, they don’t have a very good range, because most of them are very good, and most of them seem to be out of stock anyway.

People have reported feeling sick after using Blue Sky peptides. That’s terrible, and when they are using incorrect and out of date purity reports, how on earth can they know what they are selling?

Also, people using the peptides are reporting nothing happening. So it doesn’t seem like they are potent or even containing what is represented on the bottle. I know that some people take them inadequately, or think they should deliver more results than they can, but this is a lot of people reporting the same lack of results over multiple years now.

I’ve also seen a few people say that they paid for a private analysis. This is something that Blue Sky peptides claim on their website they encourage people to do. They even encourage them to send those reports to them to get a reward. As none of them are published on the website, it would seem nobody has done that.

People who have said they in every case I’ve seen, have said that the analysis found that there was a far lower dose contained within what they bought than was advertised.

Overall, there’s very little out there in 2022, and before 2021 and 2020, that has a good word to say about any of the chemicals that this company sells.

Is Blue Sky Peptides Legit Or A Waste Of Time?

I can’t say Blue Sky peptides are a scam company. They do deliver when you order, and to some degree, it appears that what they deliver is what they advertise.

Is Blue Sky peptides legit? Yes, but the quality is not good at all.

High Quality Sources Of SARMs And Peptides That Are Trustworthy

The conclusion of this Blue Sky peptides review has to be that I would not order from them, and I don’t advise you do either. There are just too many red flags when you put everything I have said together.

The really is no need to take the risk when all of the products they sell are available from far more reputable companies that do have current purity reports published on the product pages, from verifiable independent American labs.

The first company I will recommend to you is Swiss Chems. They been around a few years, and they offer superb quality SARMs and peptides in a variety of formats. They also offer PCT supplements, and nootropic supplements as well. So Swiss Chems are a one-stop shop for all your needs.

The second company I will advise you to look at is our Chemyo. Probably the biggest and most trusted source of SARMs, research chemicals, peptides, nootropics, and other supplements in the USA right now.

Whatever you want, they sell it. The quality is guaranteed through current purity reports, and customer service levels are good.

Comparing either of these companies’ online reviews and profile against Blue Sky peptides is like comparing night to day.

So please do not consider buying from Blue Sky peptides unless you are absolutely desperate. You will not be getting the best quality products, you cannot verify what is actually in the bottles you are buying, and there are simply far better alternatives out there that offer rapid delivery across the USA and beyond.