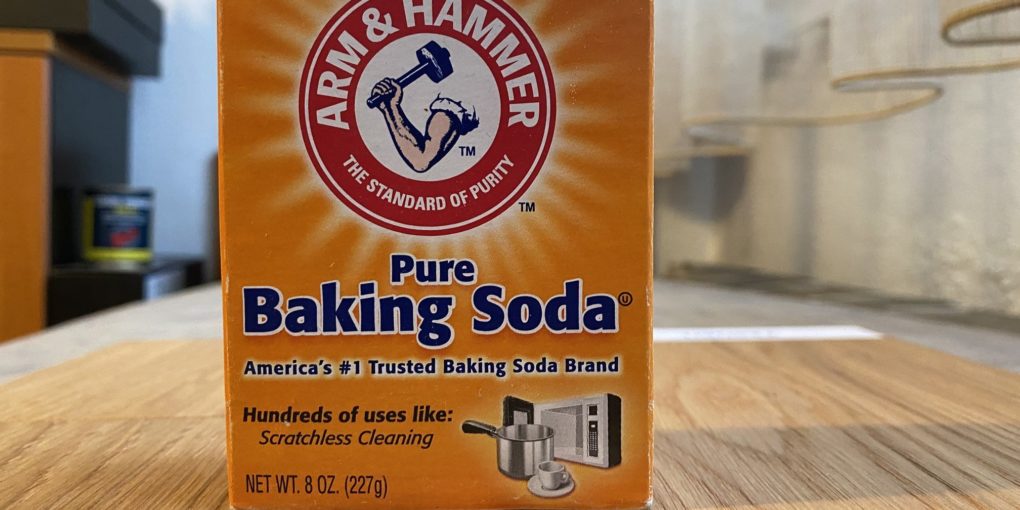 How To Pass A Urine Drug Test With Baking Soda

Actually, that’s not entirely true. I’m going to tell you how the baking soda method is done, and then we are going to discuss if it’s actually possible that it can work to pass a drug test using this method.

As well as telling you the truth and giving you the detail about the baking soda drug test instructions, we will also briefly touch on three surefire ways to pass a drug test using other methods.

Why Do People Suggest The Baking Soda Method?

There are a variety of reasons why people suggest that baking soda can help you to pass a drug test:

The baking soda drug test instructions are pretty straightforward, and certainly won’t take much time, or cost much money: 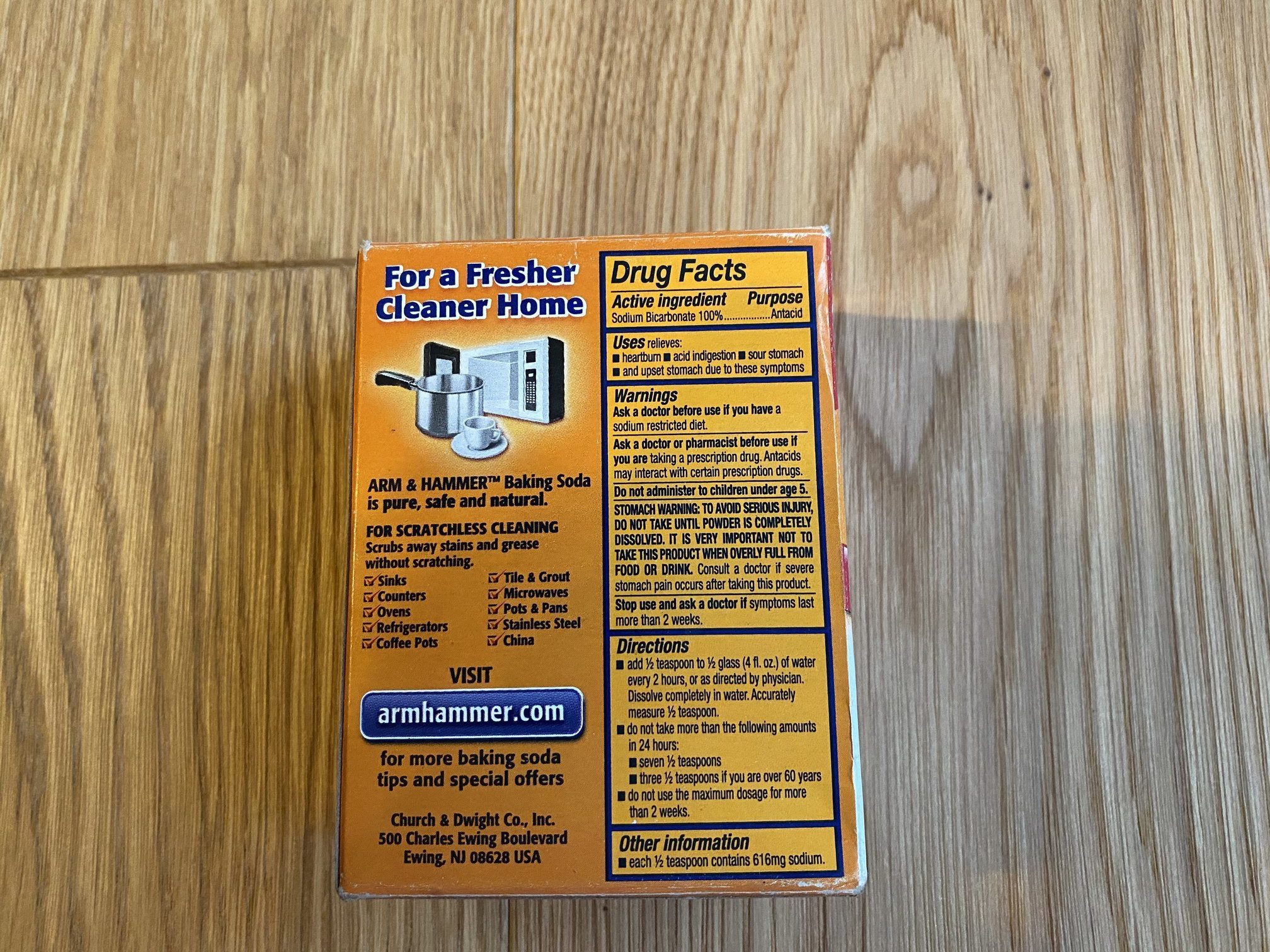 Does Baking Soda And Water Help You Pass A Drug Test?

So above are the steps on how to pass a urine drug test with baking soda. But does this method actually work? Well, the unfortunate news is that there is not a chance in hell that it will help you to pass a drug test. You might vomit, and you’ll definitely fail a drug test, but that’s it.

There’s nothing magical about baking soda. It’s sodium bicarbonate, basically a form of salt. In your stomach, it’s converted into a salt, just like you would shake over your french fries. That’s not going to pass you a drug test.

The only other part of using baking soda to pass drug tests is water. Sure, you will flush out your bladder. The volume of liquid you’ve just drunk will push out to the existing urine that could contain drug metabolites, and replace it with fresh urine that won’t, at least for a short space of time until your body processes metabolites in it and pushes those into that urine.

But scientifically, there is zero evidence that baking soda and water help you pass a drug test.

Forget all that crap about amphetamine and methamphetamine metabolites being similar in terms of body processing to salt. It’s just nonsense. Your body doesn’t try to process the salt first because of homeostasis, and even if it did, unless the only drug metabolites in your body are amphetamine or methamphetamine ones, then it’s still not going to work.

Home remedies are old wives’ tales, they are urban myths, Internet jokes, and nothing more than the destination of the desperate.

On top of not working, some of them can be downright dangerous. If you drink enough baking soda it could cause problems with kidney function, especially if your kidneys are not working efficiently in the first place.

I’ll also warn you about an even more crazy method related to the baking soda drug test instructions called the “baking soda bomb”.

This involves following the baking soda drug test instructions but also mixing in a couple of tablespoons of bleach. Yes, you read that right, people advocate you drink bleach.

On top of the violently vomiting, which would completely undo any point in drinking the mixture in the first place as it will never be processed by your body, you also stand a real chance of burning your insides and wrecking your kidneys.

So no, you can’t learn how to pass a urine drug test with baking soda, because it’s a home remedy that doesn’t work. If you want to pass a drug test then there are three ways that you can guarantee to pass, and I’ll run you through them right now. 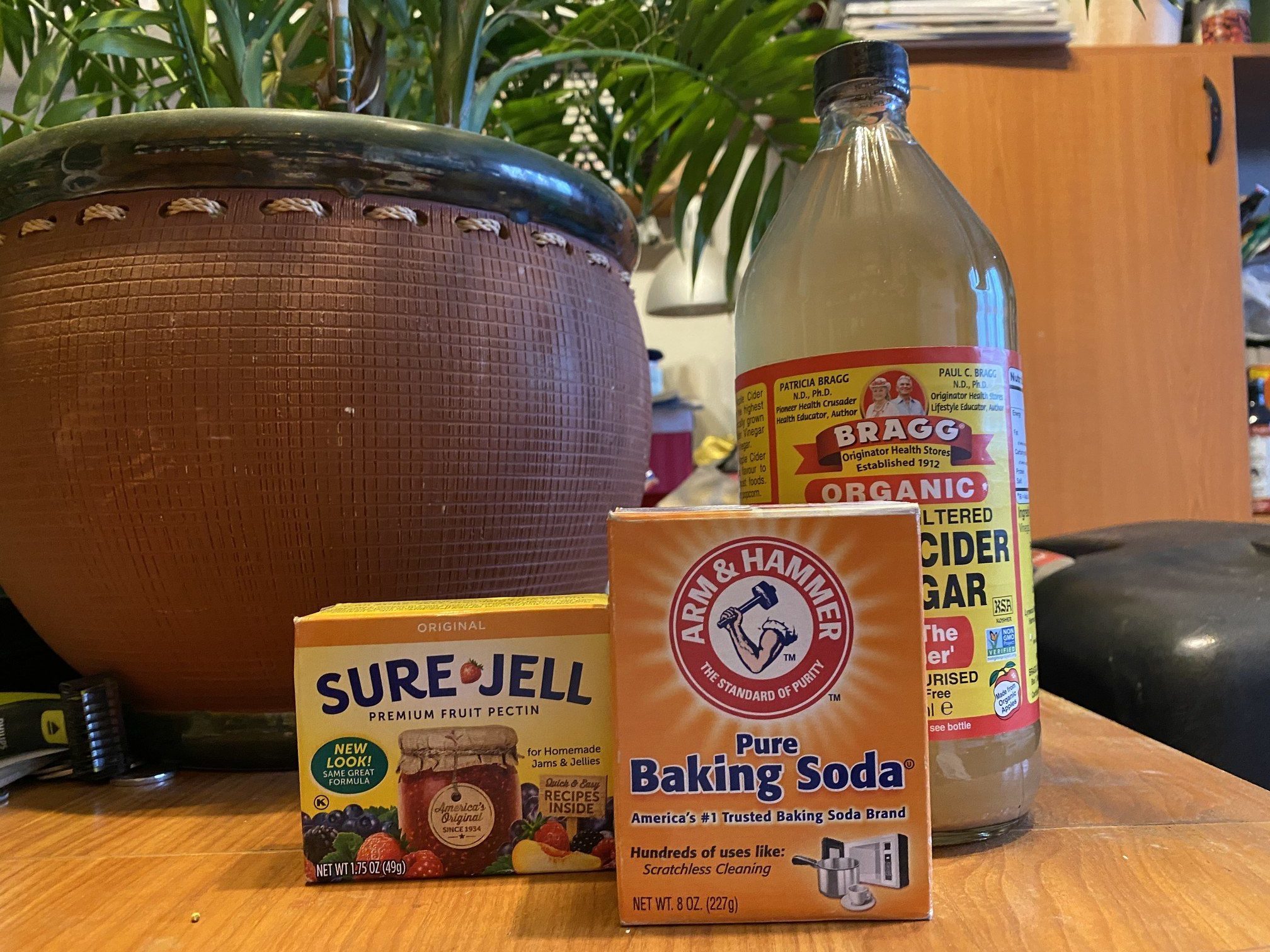 So now you know that it’s impossible to learn how to pass a urine drug test with baking soda, let’s look at three ways you can pass a drug test guaranteed:

Probably the most foolproof way to pass a urine sample drug test is to submit a completely fake sample of high-quality synthetic urine.

The brands I would recommend are Sub Solution and Quick Luck. Both are made by Clear Choice, and both are the most complex formulas on the market. They are the most expensive as well though, retailing at $80 and $100 respectively.

Heat activator powder is far better than the heatpads you get with most synthetic urine products because there is no chance of failure. When you get to the lab, just before you go in, you simply tap in some heat activator powder, shake it, and watch the temperature rise. Once it’s within the correct temperature range (between 90°F 100°F) you can walk in and confidently submit your sample. 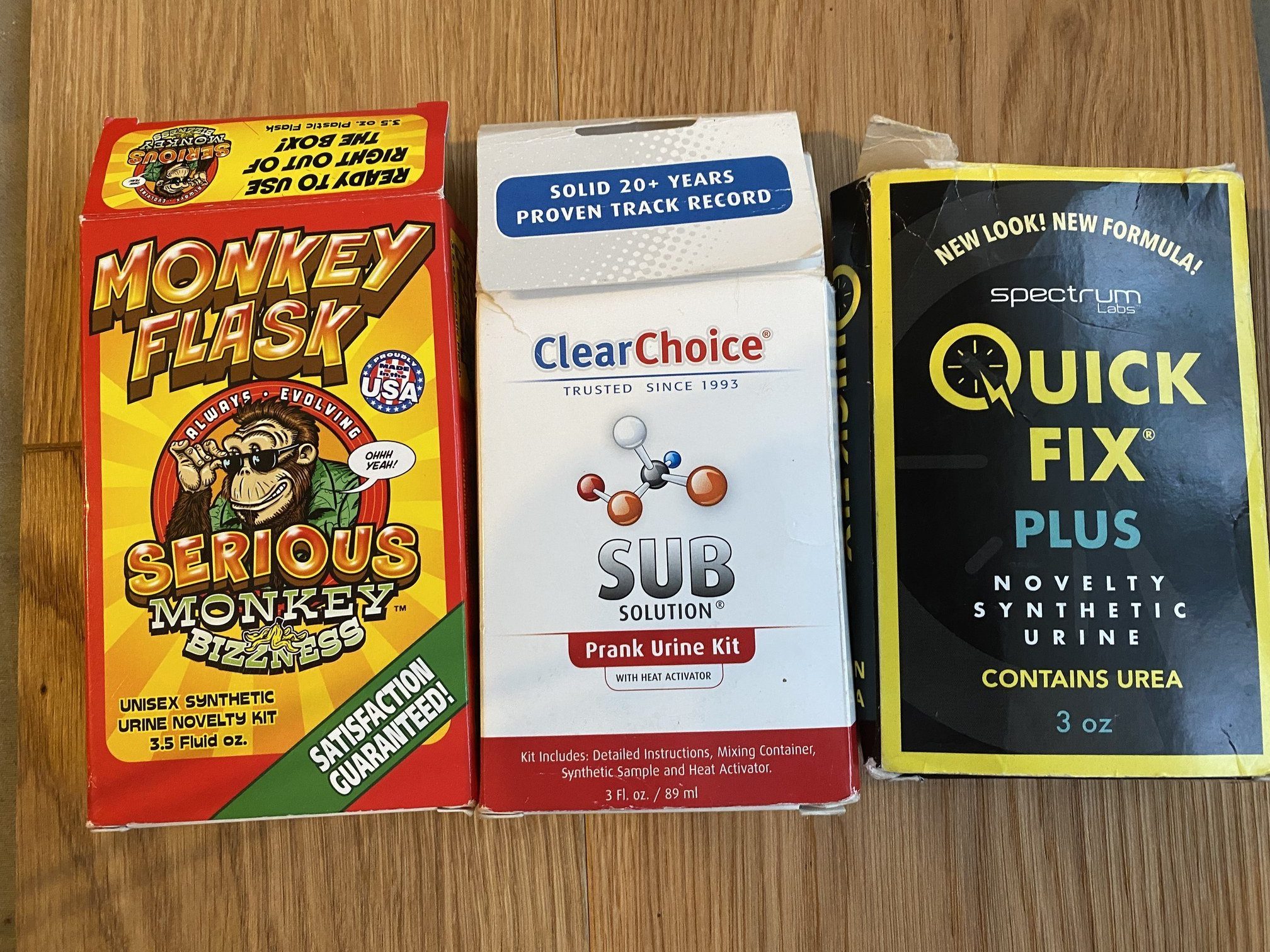 Unfortunately, your drug test might be supervised, or you might not have the courage to smuggle in a fake sample, which leaves you with detox drinks as an easy option, especially if you are facing a drug test at short notice.

The first part of the detox drink works a bit like the baking soda drug test method. You are flooding your body with liquid. This flushes out the existing urine that contains toxins and replaces it with a flood of urine which is not yet been populated with toxins as it won’t yet have worked their way into your bladder.

But the second part is where they are clever. Your body can only cope with so much. So any nutrients that are in excess of what it needs are passed through your liver and kidneys and into your urine for expulsion from the body. So a good quality detox drink contains nutrients, chemicals, and waste products found in urine.

By flooding the body with it in one hit, your body passes some through, meaning that the fresh urine that has flushed out the toxins is not diluted, it still contains things found in naturally balanced urine.

Rescue Cleanse is the best brand of detox drink you can buy. Another alternative is Mega Clean, but only if you can buy it from this shop where you can get it with pre-rid pills that alongside a 24 hour detox make it as powerful as the other two recommendations. 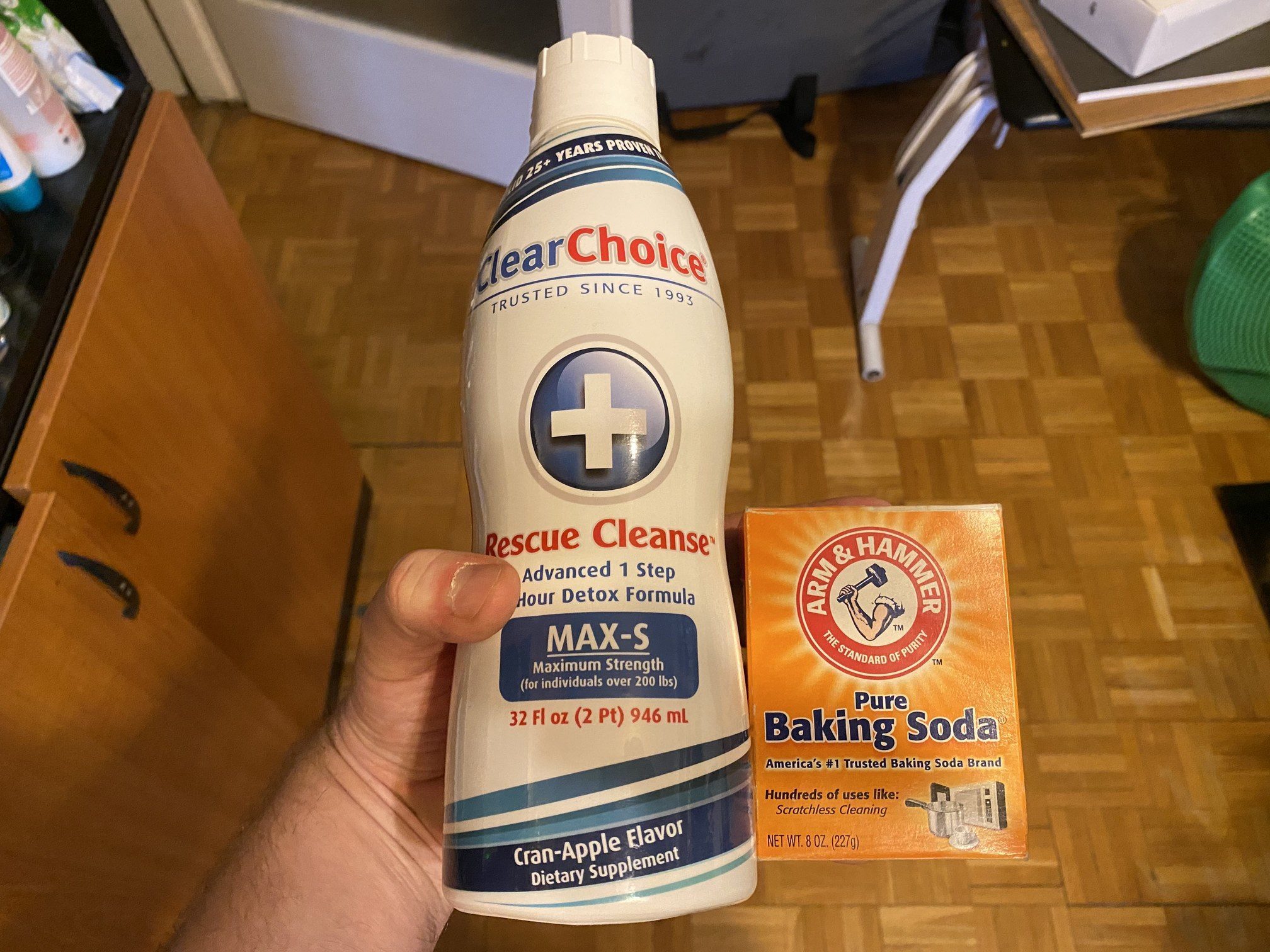 Natural detox is definitely the way to get properly clean to pass a drug test. The problem is that if you are a regular user it could take a week, sometimes longer to get naturally clean. In fact, if you are a chronic weed smoker then drug metabolites can cling on to cells in your body for several weeks, making it a very long and painful process to do a natural detox.

But this can be accelerated using powerful detox pills. Toxin Rid of the only brand that I really recommend because they are so unique in their composition.

They are available in course durations from a single day all the way through to 10 days. I wouldn’t really suggest using anything less than a five day course if you are a regular user.

But they can get rid of drug toxins at up to twice the rate as your body can naturally. So if it would take you 14 days to get clean, then a 10 day course of Toxin Rid could mean you are free of drug toxins in as little as seven days. 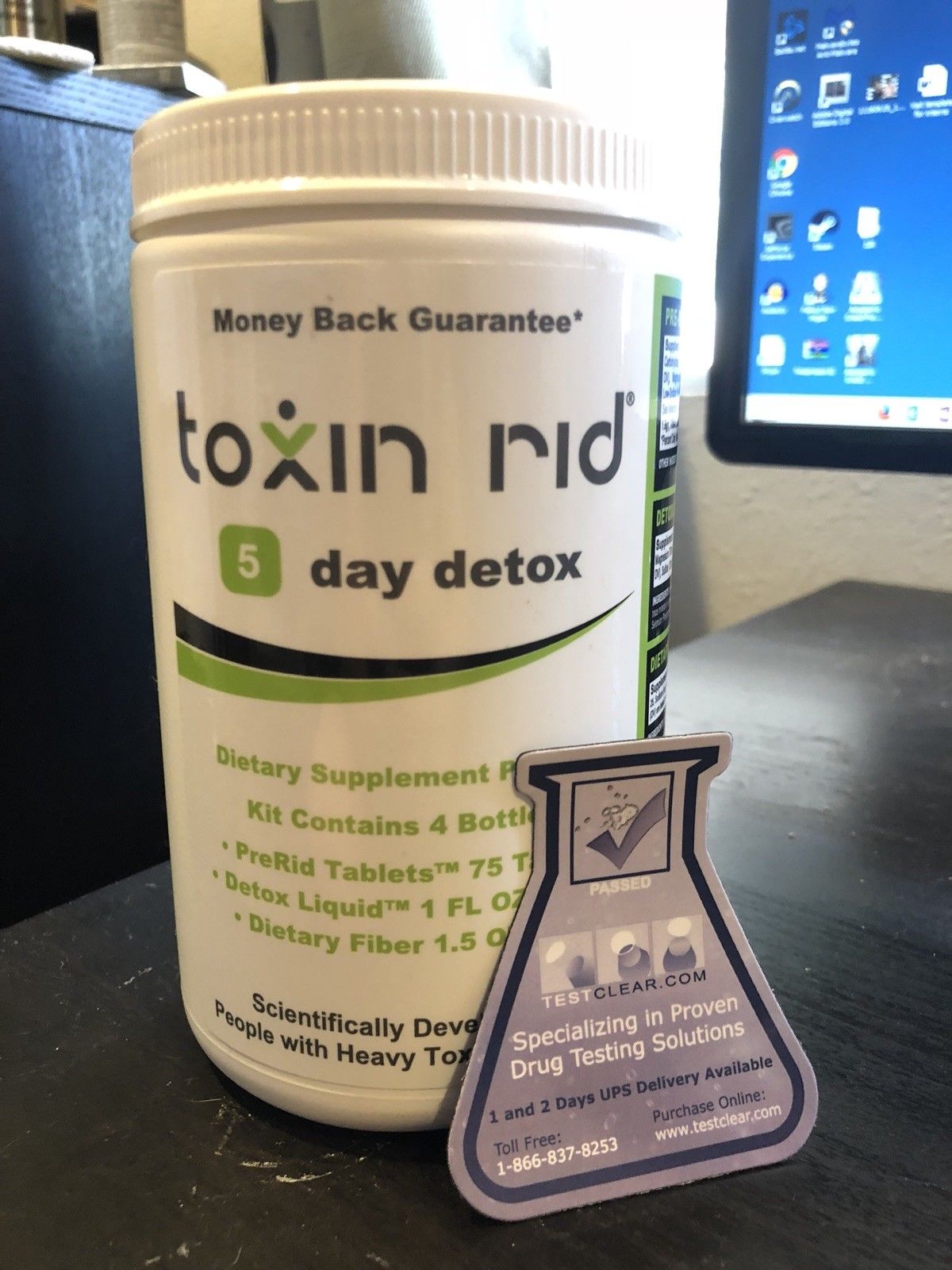 Any three of these trusted options are far better than using baking soda to pass a drug test.