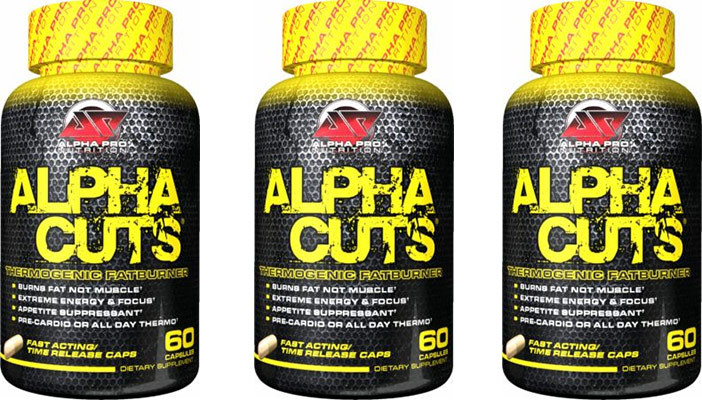 Alpha Cuts is a pre-workout fat burning supplement I only heard about a few months back. I tried it recently, and I wanted to pass on my experiences to you in this review.

The thing is, there’s not a lot out there about Alpha Cuts, or the company who make it (Alpha Pro nutrition).

Considering they make a dozen different types bodybuilding supplement, you’ll find it astonishingly difficult to get any information about the company, or the products being used by anyone!

So I’m here giving you the lowdown on the pills and the powder versions, including how to use them, and the effects they can have pre-workout for you.

Plus, I’ll talk to you about my concerns around Alpha Cuts, side effects and problems in my experience, and finish by giving you free alternatives that I feel could be better quality fat burning supplements.

Who Are Alpha Pro Nutrition And What Is Alpha Cuts?

Alpha Pro Nutrition have been around for a few years, and certainly the social media presence is at least three years old. Their comms are also current, so the company is still going.

All of them are based around natural compounds. They also claim they are legal, however, that’s not completely true as I will explain later.

Alpha Cuts is their main pre-workout fat burning product. However, it’s not just one product, and that caused me a lot of confusion during my research.

Let Me Explain There Are Two Different Versions Of Alpha Cuts

Although they are marketed as the same product, and you are told in the advertising text you can get Alpha Cuts pills or powder, that’s not the whole story.

So although they are both called Alpha Cuts, and marketed as a powder and pill version of the same thing, they are in actual fact entirely different supplements that contain completely different list of ingredients.

How Does Alpha Cuts Work & What Are The Benefits

So overall, you’re taking this before you hit the gym. It will give you improved mental and physical performance, and help you to burn more calories by powering through your workout.

But it also contains thermogenic compounds, metabolic compounds, and fat burning compounds, that help your body to burn energy more quickly, and focus on fat burning and eradication. Overall, you should cut fat at a faster rate than you can doing exactly same level of exercise without it.

In order to achieve all those incredible benefits though, the ingredients of Alpha Cuts have to be proven to have the ability to do it all. So is that the case?

Alpha Cuts Ingredients For Both Pills And Powder Formats

The Alpha Cuts website goes to huge amounts of trouble to explain what each of those does in detail, for a total of more than 5000 explanatory words. I don’t think anyone’s really going to sit and read all the way through it.

I find that concerning, because it makes it feel a bit like they are just throwing words at you to make it sound good.

But to give you the highlights, there are several stimulants in there, and appetite suppressant, a fat transporter, mood enhancement compounds, metabolic messengers, as well as thermogenic boosters.

Now let’s take a look at the ingredients of the Alpha Cuts pills:

As you can see, there are only a handful of ingredients in comparison to the huge list of compounds in the powder.

Those ingredients do slightly different things as well, by driving blood sugars into the muscles better, balancing blood sugar, caffeine derived stimulation, fat burner, a compound to prevent the conversion of glucose into body fat, and better fat oxidation.

As you can see, the pills effects are all targeted around stimulation (purely from caffeine) fat burning, fat oxidation, and glucose conversion.

None of the ingredients in the pills deal with cognitive sharpness, calmness, or mood enhancement. So overall, they are not as good all-round as the powder.

Do The Ingredients Stack Up The Claims Made?

Ingredients definitely do what is claimed. But how good they are doing it, is another question entirely.

As far as the science goes, yes they do what is claimed, however, some of the effects are so minor that the average person may not notice any particular benefit.

My big concern is that the pills and the powder have different overall balances, and the pills do not offer any sharpness, drive, or calmness (basically mental enhancements) beyond the caffeine, compared to those of the powder.

So in some ways the claims around this product are misleading because they are comparing apples to oranges, and suggesting all the effects come from both formats.

Here’s How I Used Alpha Cuts For One Month

Now I’ve given you a bit more information on what’s in Alpha Cuts, and how there’s a bit of a problem between choosing the pills of the powder, let me talk you through my Alpha Cuts experience after one month.

I wanted to try and find a natural fat burner that I could take all the time safely, without having to cycle it, or worry about long-term side effects.

My research led me to Alpha Cuts recently, and I thought I would give it a try.

I was very surprised how little there is online about the company or the fat burning product. Usually there’s tons of stuff on places like Reddit and bodybuilding forums, but it’s suspiciously scarce.

There’s plenty of advertising out there, lots of social media work, but it’s all marketing, with very little information about people actually using this stuff.

But as it’s really dirt cheap to buy, I decided to just give it a try for a month.

I carried on with my usual gym routine, three times per week for 90 minutes, with two sessions of cardio between, and really good diet and exercise.

Generally I found the following benefits:

I will say though that I got the best effects from the powder, which is hardly surprising considering the huge range of compounds in it compared to the pills.

With the pills, I just felt stimulated due to the caffeine, and I don’t think I lost as much weight in the second two weeks as I did the first. However, that could be down to the chance of obviously diminishing returns the longer I used it.

Overall though, it was a positive experience, I didn’t have any side effects, and they definitely worked. However, the powder was significantly better than the Alpha Cuts pills.

Together, the Alpha cup complete nutrition pill in powder package works, but for me it’s not the best I’ve found as a pre-workout supplement.

Side Effects & Problems With Alpha Cuts

Both the pills and the powder can produce nausea, stomach, and bowel problems.

Slightly more seriously for me, is the inclusion of Citrus Aurantium in the pill form of Alpha Cuts.

It’s been linked to causing more serious side effects in some people, including high blood pressure, high levels of thyroid activity, and a rapid heartbeat.

Plus, it’s actually banned by several sporting bodies, meaning you could get caught out badly if you are doing anything sporting professionally or semi-professionally.

My Verdict & The Three Fat Burning Alternatives You Need To Consider

My verdict is that Alpha Cuts pills and powder are pretty good, especially when you considering how cheap they are.

However, the powder is better than the pills, and even though you can stack them together at half dosage to derive full benefits, that’s only going to increase the outlay.

For me, the alternatives are better.

My advice would be to try those first before you go for Alpha Cuts. That’s why did, and to be honest nothing in the trial I did would make me swap out that any of those three supplements.